This post was originally release in 2014 on a now dead Nomie server.

TL;DR: All existing "life tracking"/"quantified self" apps suck - so, I created one that I'll actually use. 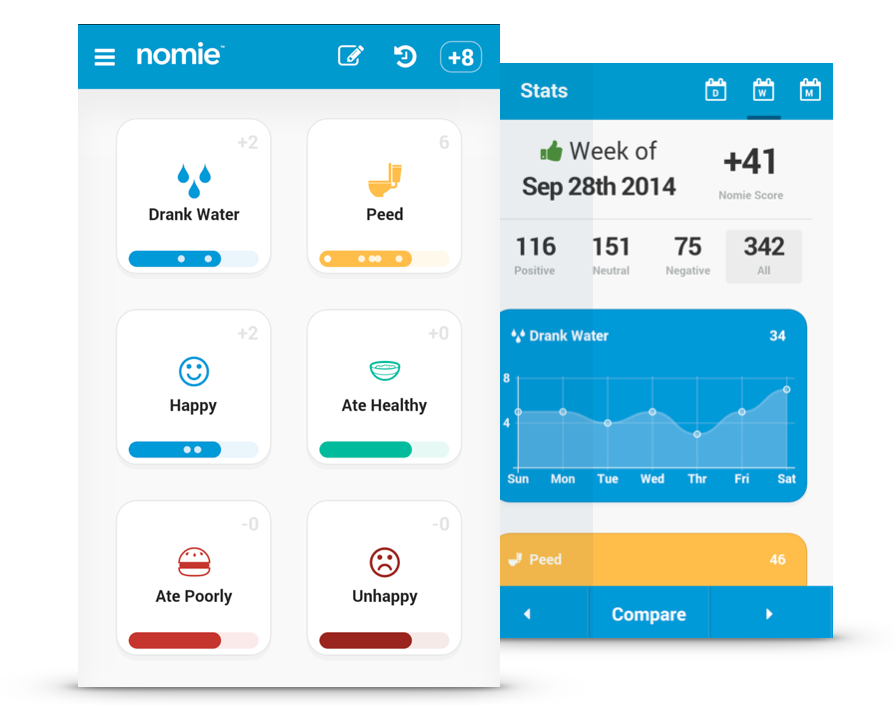 As you'll find out later in this post, I was excited as hell when all the new life, fitness, and mood tracking software and hardware started flooding the market. But alas, after using most of them, I came to the conclusion, they all suck.

They make entirely too many assumptions on what I want to track, they require too much of my time, or are simply too complicated to be useful and used multiple times a day.

Once again, I found myself without an app that I dearly needed.

Back in 2005 and 2006 I was going through some fairly turbulent modulations of emotional state. I was working insane hours, I wasn't eating, I was barely sleeping, I was smoking and drinking too much, and my relationship with my wife was in a downward spiral. All in all, things just sucked. I was, as many call it, hitting rock bottom and looking for answers.

I was repeatedly told I should keep a daily journal of each days events and associated feelings, and emotions. I'd write every once in a while, and then forget for a while. I almost NEVER went back and analyzed the past. Why? Because I'm a digital human who ain't got no time for that!

Accordingly, I reasoned if I would map out my behaviors, mood and actions electronically, I might be able to start pinpointing which specific behaviors are causing my pain and pleasures, and answer some on going questions like:

In May of 2006 I started building LifeLawg, a web based application to record my events, emotions and feelings - and compare them across multiple time ranges.

Below is the only remaining screenshot of LifeLawg - a report of how my different activities interacted with one another. The rest was lost in the Great Harddrive Crash of 2009. 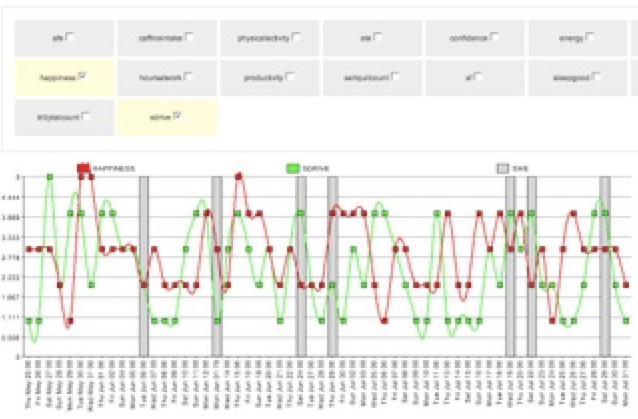 I used LifeLawg actively for 3 months, but found it damn near impossible to always remember to sit down at my desktop each night to record my logs. Remember those days? Before you had the internet in your pocket?

Throwing in the towel, I decided to wait until someone smarter than myself would build the tracking service of my dreams. There was no doubt in my mind that it would happen.

When I heard about Daytum and started seeing companies like Lark and Fitbit releasing hardware and software - it seemed like the quantified self revolution was finally upon us. My wait for the world's easiest self tracker surely was soon to be over.

However, nothing has yet to satisfy that itch for that incredibly fast and simple life tracker that's a pleasure to use.

FUCK, I guess If you want something done right... - Brandon Corbin

The first requirement is an event could be tracked in less than 10 seconds. This includes the time it takes to get my phone out of my pocket, navigate to the app, and recording the actual event.

TRACK ALL THE THINGS!

It has to track any single crazy ass idea I might want to track.

Because of the initial requirement of recording an event in under 10 seconds, I had to remove the LifeLawg concept of "configurable fields" for a tracker. No more "how many fluid ounces". Instead, I opted for basic rules that the user decides. Drink a glass of water? That's one click. Drink two? That's two clicks.

No syncing, no downloading and email csv. Everything needs to be securely in the cloud, and available on all devices. 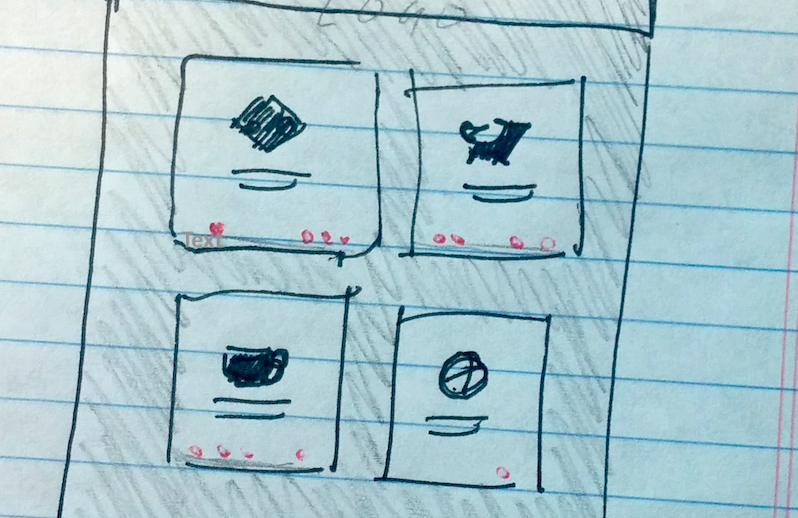 I finally decided that a single click button design pattern would be the most efficient approach.

Each button would contain an icon, a name, a unique color. Clicking the button would record the time and your geo location of that specific event.

After the first week, I quickly realized that showing a small tick mark each time an event happened throughout the day gave me much better insight into how I was doing.

Now the bottom of the button is a timeline for the day. 12am starting at the far left and 11:59pm at the far right. As you click, a "tick" is added to the timeline. While I thought it would be a cool feature, I didn't realize how important it would become. I use this timeline as a quick assessment of how I'm doing, am I drinking enough water? Am I getting angry too frequently and need to go meditate? All from looking at a single button.

Below is the progression of the button design and layout - damn that first one was UGLY.

Reporting that gets smarter with time

While I'm working on some pretty insane plans on the reporting front that we will withhold from this post, Nomie currently can handle generating charts and comparing events by day, week or month. 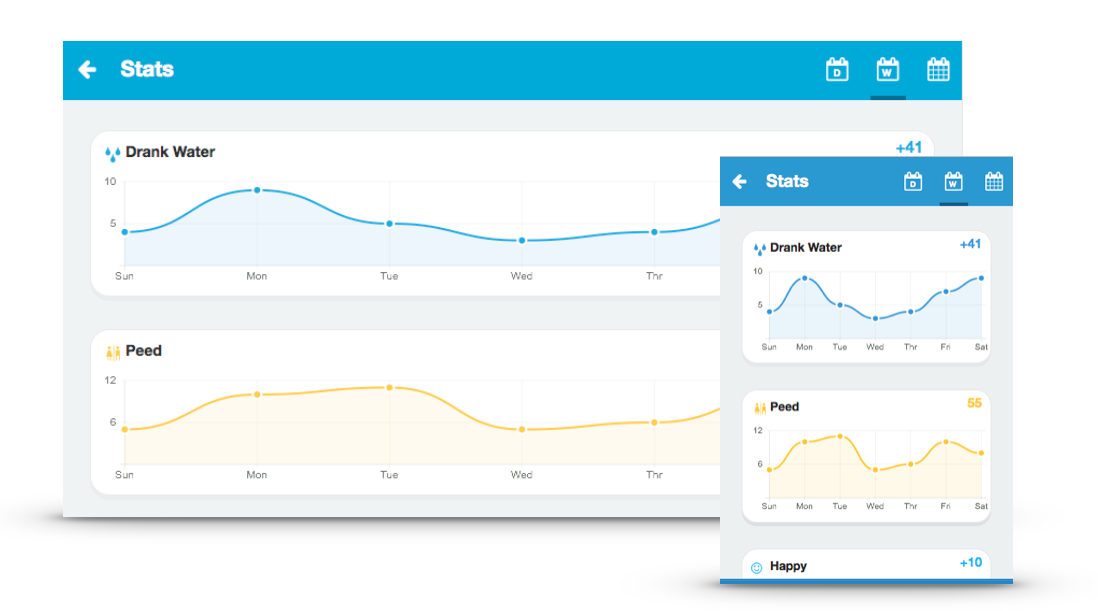 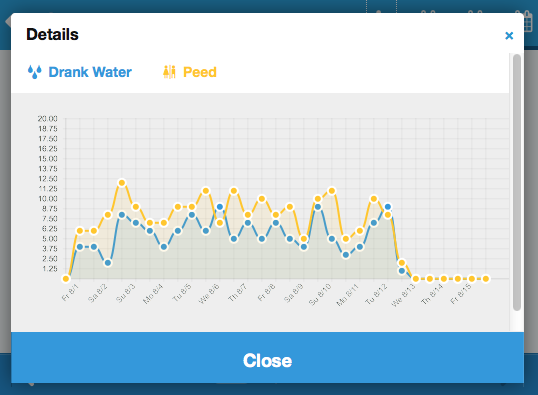 What have I learned in the last month and a half?

Since I have been tracking I've learned the following: 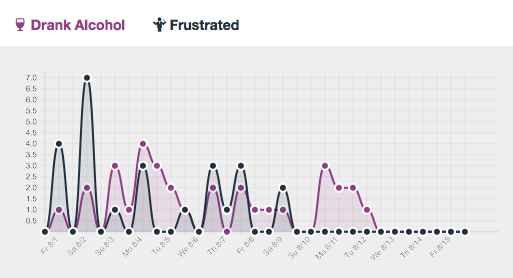